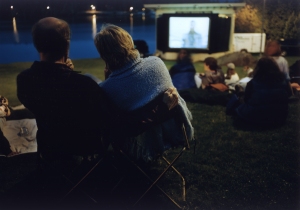 The Lake Placid Film Forum is also known to many as the Lake Placid Film Festival.  The Forum focuses on film exhibition, education, community, both established and emerging filmmakers, and personal relationships.  From 2000-2013 it has been an annual event in June.  For 2014, the Forum has been shaped into a monthly series, with the June event expected to resume in 2015.
*
The Adirondack Film Society is our year-round, not-for-profit parent organization.  The AFS is involved in a variety of projects, from the Go Digital or Go Dark campaign, to showing silent movies, and often sponsors or curates other film & arts events.  The Lake Placid Film Forum is the principle program administered by the AFS.
*
The Lake Placid Film Forum exhibits a series of films and often features the filmmakers and cast members who attend the screenings.  Set in the picturesque and secluded Adirondack Mountains, the Film Forum is a unique event where industry professionals can come together.  Here the public find the films and their representatives accessible, and students and emerging artists are provided educational opportunities.
*

The films are selected by Artistic Director Kathleen Carroll, with artistic support from a programming committee, the counsel of a Board of Directors, and Project Specialist T J Brearton.  Regional films are submitted for a showcase called North Country Shorts.  In 2006, the LPFF introduced a 24 hour Student Filmmaking Competition called “Sleepless in Lake Placid,” which has become a highly anticipated and exciting event.